Walking along the creek, my husband and I saw several cypress trees.  Their feathery leaves remind me of wild bushy hair, and their trunks flare at the bottom like skirts.

I suspect these are “bald cypress” who like to live near water and sometimes even in swamps. Their knobby knees, which are actually roots, grow up out of the water. 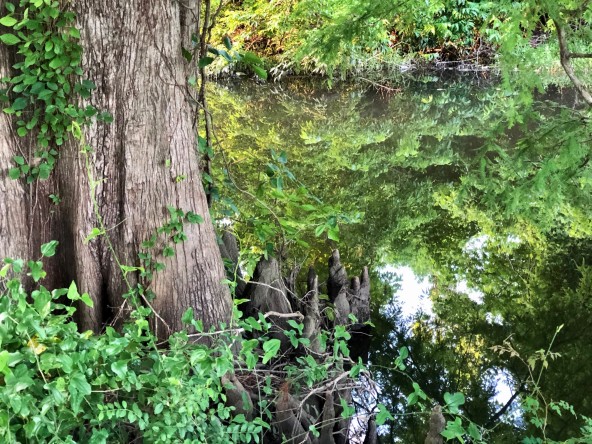 As I lingered to take pictures, David walked a little ahead of me.

More cypress trees on the right

He spied something dark near the creek bank and beckoned me to come see:

The turtle dressed in algae wanted privacy, so we didn’t stay long.

#ThursdayTreeLove is a photo feature hosted by Parul Thakur on the second and fourth Thursday of each month. For more tree love, visit:

Since my father died in January, I drive the hour to his house (which is technically my house now) once or twice a month to sort through the possessions he and Mom collected over the 47 years they lived there. It’s quite a process (physically and emotionally) which will likely take me a couple of years.

A mile from their house (I can’t seem to call it my house since I haven’t lived there in 40 years) is a Chinese restaurant with a buffet.  After mom died, we started going there for Christmas dinner.  Dad didn’t want to have a “family dinner” at the house without her. Since Dad died, my husband and I have gone to the buffet occasionally since it’s so convenient. In addition to it being strange without Dad, there was something else that bothered me about the place. They have one of those 6 foot long aquariums with large fish swimming back and forth in what seems like very little space for the number and size of the fish. To make matters worse, they have a turtle swimming around there too. The turtle, about the size of my open hand, would pull itself up on a corner and stick it’s head out, maybe  waiting for a treat. I always worried that the turtle didn’t have anywhere to rest other than perching on the corner of the tank. Didn’t he get tired from having to swim all the time? I worried that he (I’m using he because, from my human perspective, it looks like a he) might climb out and get hurt. So, I decided I didn’t want to go to this buffet anymore, because it upset me to see the turtle living in these conditions. That was until recently, when we were tired from all the sorting, and the buffet was just too convenient, so we went.

On this last visit, I noticed they  had put a piece of wood in the aquarium for the turtle to perch on.

I thanked the manager for this addition on the way out. He said he wanted to tell me a story about the turtle. He said that five years ago, a customer had found the turtle on the floor, just inside the outer door of the foyer.  He held up his fingers to show that the turtle had been about the size of a silver dollar when they found him. They put the tiny turtle in the aquarium where he has lived, and apparently thrived, ever since. The manager smiled as he told the story, like he was fond of the turtle.

If it had been me who found the baby turtle, I probably would taken the him to a pond or creek to swim free and hang out with other turtles. But then, he could have been eaten by an alligator.  And who knows if he was even born wild. He kind of looks like one of those store bought baby turtles, which is another problem altogether.

After hearing the story, I considered this turtle, and the restaurant, from a different perspective. In a way, the restaurant management had rescued the turtle from being stepped on. They gave him a home and took care of him. And who knows? Maybe he’s happy there, especially now that he has a perch to rest on.