Soon after giving birth, Reyna Lopez tested positive for COVID-19. After more than 100 days in the hospital where she had to be sedated for much of that time, Reyna is finally home with her family. Here’s the rest of the story from Good Morning America

“What if we just leave those doors open and allow the animals on each side to roam back and forth?” Tim Morrow as new CEO of the San Antonio Zoo.

In an ideal world, we wouldn’t need zoos. In an idea world, all animals would have plenty of natural habitat. Still, I commend zoos where they try to increase natural habitat. That’s what happened recently at the San Antonio zoo which created a “savanna crossing” between habitats. I found this at J-Dubs Grin and Bear it. You can read more and see a video of rhinos exploring their new space and neighbors in this article.

After a deadly attack on the Notre-Dame Basilica in Nice last month, a group of French Muslims coordinated with police to help guard the catholic church for all-saints weekend. They plan to do the same for Christmas mass. Here’s more of the story from The Good News Network.

First Ironman with Down Syndrome

Chris Nikic didn’t walk until he was four years old. “But, for Nikic, who has Down syndrome, anything is possible.” Earlier this month, he completed the 2.4-mile swim, 112-mile bike ride and 26.2-mile run known as the Ironman triathlon with 14 minutes to spare. Here’s the rest of the story from Good Morning America and here’s the video showing Chris and his guide on all three parts of the triathlon.

For more good news, check out the Instagram page below:

I’m a huge fan of , The Lord of The Rings, by J.R.R Tolkien. Having read it as a young adult, the film trilogy is something I could watch over and and over, and have.

So, I was quietly disconcerted last weekend when my father, flipping channels, wouldn’t stop at one of the trilogy movies on TV because he heard it was satanic.

I love my father dearly. He is one of the bravest men, I’ve ever known. No. He is the bravest and the strongest. Even though he’s 84. But he leans as far to the right as I do to the left. He’s a conservative.

I told my father that I thought J.R.R. Tolkien was a Christian, and that I didn’t think he’d write a satanic book. But I didn’t take it any further, not wanting to stir things up, and not sure of my facts.

When I saw Linda’s SoCS prompt, the word, “ring,” my mind flitted around a few things and came to rest on The Lord of The Rings, and my father’s belief. I felt compelled to find out more.

The information I’m going to share below comes from this article by Drew Bowling,

which I found at aleteia.org, an organization which reports “the news of the world from a catholic perspective.”

J. R. R. Tolkien was a devout Catholic. Before the trilogy was published, he wrote to his friend,  Father Robert Murray, saying, “The Lord of the Rings is of course a fundamentally religious and Catholic work; unconsciously so at first, but consciously in the revision….”

Tolkien was a close friend of C.S. Lewis “who converted to Christianity in part because Tolkien convinced him that the Bible is the one true myth.”

He also attested time and again that the novel is mythical, not creedal.

That does not mean that The Lord of the Rings is not true, or that its author’s faith is not communicated through its pages. On the contrary, as Tolkien once said, “In making a myth, in practicing ‘mythopoeia,’ and peopling the world with elves and dragons and goblins, a story-teller… is actually fulfilling God’s purpose, and reflecting a splintered fragment of the true light.”
(From: Drew Bowling, “How did J.R.R. Tolkien’s Catholicism influence his writing?)

The article also made a point I love about The Lord of the Rings bringing people, who may not be interested in Christianity,  to the bigger truths of God, of goodness and light. 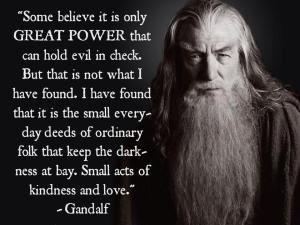 I know that my copying and pasting got in the way of my stream of consciousness, and the article is a sort of intellectual, but the idea came along the stream, and I just had to grab it. I don’t know if I’ll bring this information to my dad. But if the right opportunity comes up, I’ve got more information about the man who wrote my beloved trilogy.

If you’d like to join in the Saturday Stream of Consciousness ring, visit:

Here are the rules:

3. There will be a prompt every week. I will post the prompt here on my blog on Friday, along with a reminder for you to join in. The prompt will be one random thing, but it will not be a subject. For instance, I will not say “Write about dogs”; the prompt will be more like, “Make your first sentence a question,” “Begin with the word ‘The’,” or simply a single word to get your started.

4. Ping back! It’s important, so that I and other people can come and read your post! For example, in your post you can write “This post is part of SoCS:” and then copy and paste the URL found in your address bar at the top of this post into yours.  Your link will show up in my comments for everyone to see. The most recent pingbacks will be found at the top.

7. As a suggestion, tag your post “SoCS” and/or “#SoCS” for more exposure and more views.

Mama Cat watching squirrels. #cattv #rescuedferalcat
#saintfrancis watching for spring
Last year’s #hydrangea #oldbrick #driedflowers #dryhydrangeas
“#followyourheart but take your #brain with you.” #alfredadlerquote Chapter 1 of From Loneliness to #love 5 Steps for Finding a #healthyrelationship #soulmatesearch
Today’s reading from #Jesus Calling by Sarah Young #practicepeace #peace
#Midwinter #dandelion In the midst of winter, I found there was, within me, an invincible summer.
Loading Comments...
Comment
×