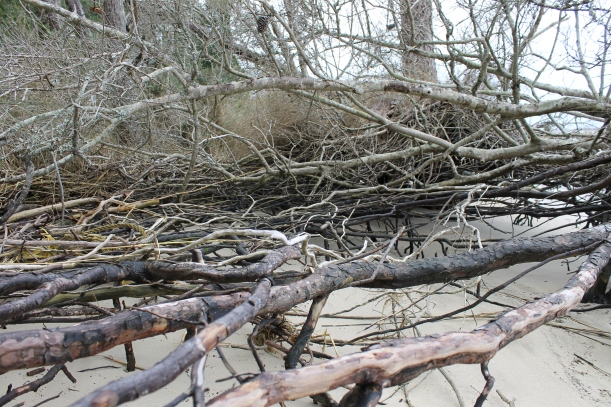 The fact that I am a tree-hugger, is not the confession. That’s something I’m proud of. The dilemma is what to do about the trees growing too close to the house. I waited several months for a hard freeze, hoping that maybe the trees would be sleeping and dormant, before removing several young trees growing right next to my father’s house. My husband couldn’t do it for me, because he was recovering from hernia surgery. My father is 84, and I wouldn’t want him to do it with his health challenges. We borrowed a tree-puller, an amazingly powerful, yet simple tool. Still some of the oak roots were deep and required considerable digging, clipping, and pulling.

It was dark by the time I finished the job. Even though the temperature had dipped below 40 degrees, I’d worked up  quite a sweat. Yet, the job was harder for me emotionally than it was physically, because I love trees. It was like those jobs I learned to set my jaw at back when I was single and had to do the hard things myself- or thought I did anyway.

I chopped up most of the saplings and seedlings, hoping they wouldn’t suffer so long that way. I decided to save the smallest sapling, a four foot pine, and two seedlings by wrapping them in a plastic bag and driving them home. They are doing okay in my kitchen, in a bucket of potting soil, until I plant them in my backyard – maybe Saturday if the weather feels right.

Along with the sapling, I’m collecting homeless poinsettias.

My church always has a lot of poinsettias leftover from Christmas Eve. Even after people have taken home the plants they want, there are usually 10 to 20 left unclaimed.

I worry that many poinsettias just get thrown in the trash after Christmas. The very least we can do is compost them. I’d heard poinsettias were poisonous, but have learned they’re not as toxic as I thought, according to this Mayo Clinic article.

Of the 15 or so poinsettias left behind at church, I brought the four worst looking plants home to compost, unless I can hold out until warm weather and plant them in the back yard. At least that way they have a chance. I left several other poinsettias (the ones with leaves still attached) at church with the plan to plant some in the church yard when winter is done.

Normally, outdoor poinsettias do not survive the winter here in the Carolinas, but anything is possible. One spring, I noticed something bright red along the fence in my backyard. I had no idea what it could be. When I got closer, I realized it was a poinsettia I had planted the previous spring and forgotten about. That winter must have been a mild one, or the poinsettia was a tough one.

Maybe I’ll pot one or two poinsettias and keep them inside, like the three year old below. I’d heard that if you keep an older poinsettia in the dark for about a month it will turn red. I put the one in the photo in our church utility closet for about two weeks in November. When I brought it out, tiny new leaves were light red. All the new growth since then has been a pinkish-red. Like magic! 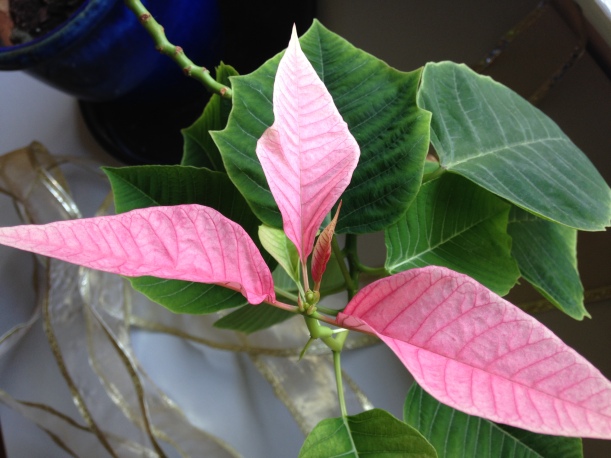 This three year old poinsettia bloomed red leaves when it came out of the closet.

I wonder if we will be able to use any of last year’s poinsettias for Christmas Eve of 2016!

Join 3,902 other subscribers
Follow Anything is Possible! on WordPress.com