It started on my way to the Potluck for Peace hosted by the local YWCA.

Just around the corner from my house, I passed by a black man in a red car who had been pulled over by a police officer and a deputy sheriff. The officers were approaching his car from behind. They appeared to be calm, and I didn’t see any guns. Part of me wanted to turn around and watch from a distance. But I kept going and said a prayer for the man in the car and for the officers. I asked God to keep them all safe.

What struck me in the few seconds as I drove by was the body language of the man sitting in the car. His hands were up on the ceiling, like he was pushing them up as high as he could within the confines of his car. It looked like he was smiling a wide and nervous smile, shaking his head from side to side, and saying something. I imagined that he could be saying: I’m not doing anything wrong. My hands are up, see? I’m not armed. I’m not resisting. God please let them know that.

I remembered the time I was pulled over by the police, many years ago, for going a little too fast. I remembered the sick feeling in my stomach of being in trouble. Then I thought about that feeling being magnified 1000 times. The thought made me shudder.

At the Potluck for Peace, about fifty of us shared a meal. We were a good mix of African American and Caucasian, with one Latina and several police officers.

We’ve all felt prejudice. When you add power, that’s when you get racism that can impede a person’s access to jobs, housing, safety, and justice.

We were invited to write feelings and thoughts about racism on giant sticky notes placed on the walls.

Then we were asked to discuss the notes nearest our table in small groups. My group focused on this one: 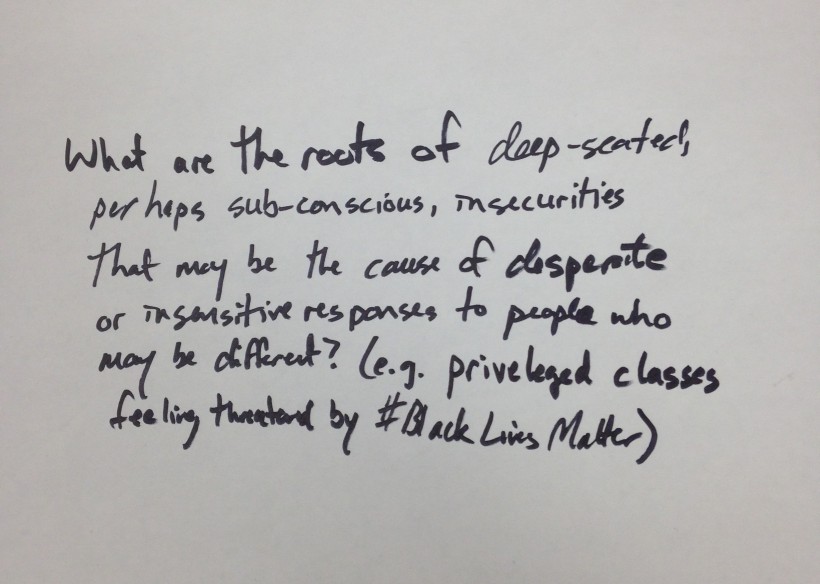 One black man shared about the internalized inferiority he felt as a child when he saw how sales people disregarded his mother in stores. As a child, he received the message that people like him and his family didn’t matter.

Black Lives Matter does not mean white lives don’t matter. All lives matter. But black lives have mattered less (sometimes far less) in our system for a long time.

We don’t have to pick a side. Black Lives Matter is part of the larger whole that all lives matter. Shouldn’t we give more caring attention to the parts of the whole that are being harmed more, including, not only black lives, but blue lives, and LGBT lives?  Which reminds me of this video of the BLM/police cookout:

Lately, I’ve heard white people I respect referring to black and brown brothers and sisters. I’m relieved we are finally realizing that talking only in terms of black and white is polarizing.

What if we started to recognize all the colors in between black and white?

It makes me want to know what people want to be called: black, brown, black and brown, African American….  Maybe I’ll do an informal survey. Feel free to comment!

My friend’s grand daughter recently referred to another little girl as having peach colored skin. Maybe she has the right idea.

39 thoughts on “What I’m Learning about #BlackLivesMatter”

Join 3,842 other followers
Follow Anything is Possible! on WordPress.com