There have been times when I’ve been accused of being a stick-in-the-mud. Not when I was in my twenties, but later, after I had kids and got responsible, and all. But there are lots of different ways of being a stuck in the mud.

One way I’m not a stick-in-the-mud is when I’m swimming. I’m not afraid to swim out far into the ocean, well I don’t go as far out as I did in my twenties, but I love to swim.

One time I would not stay stuck in the mud, after having kids, and becoming responsible, was on a canoe trip with a local environmental group I took my daughter on. Back then, it was mostly just me and my girl. She was in her early teens; I was in my early 50s.

Paddling out  on a beautiful summer morning, the air was fresh and clean as we cleared the basin and meandered through the canals in the marsh grass. We saw white egrets and a sea hawk. I love the coolness of the water droplets on my skin when paddling in the summertime….

Anyway, on our way back, the tide had gone out, and we had to carry the canoe when the water became too shallow. We were toward the back of the group to begin with, and then we became last in line. The people in front of us got further and further away, so that eventually we couldn’t see them anymore. It was just me and my girl, and the mud sucking at our sneakers as we carried the canoe that got heavier and heavier with the sun directly overhead.

We stopped for a rest on a narrow strip of beach. I realized what a beautiful day it was, and squatted down to take a picture of the marsh grass and while fluffy clouds, that gave no hint of the sucking mud. 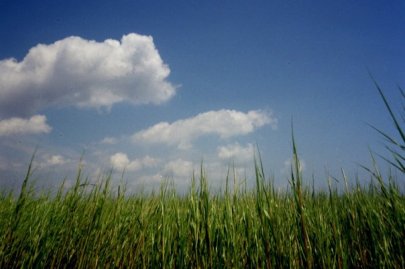 “Why don’t we just leave the canoe here, and they can come back and get it?” my daughter asked.

“Because it’s our responsibility,” I said. “Besides, we’d have to swim when the water gets deeper and I don’t want to get my camera wet.”

“Well, you might as well leave me here to die,” she said in her best drama queen voice.

“I’m going to throw mud on you!” I teased, bending down to scoop some up.

“Something just jumped in the boat!” she yelled. “What the hell is that?”

Something was flapping around in the canoe.

“Okay, that means we have to have shrimp for dinner,” she said.

“We have to get out of this mud first,” I reminded her. “Are you ready to move on?”

We got the little shrimp out of the canoe and persevered through the mud, finally making it back to the basin, and the joy of paddling, to find the rest of the group as relieved as we were. They hadn’t realized we had been left behind until the head count was short.

The misery of the sucking mud soon faded, to be replaced by the memory of accomplishment by me and my girl.

This week’s Stream of Consciousness Post was: “stick” If you’d like to join in the fun, visit:

The Friday Reminder and Prompt for SoCS May 16/15

Here are the rules:

3. There will be a prompt every week. I will post the prompt here on my blog on Friday, along with a reminder for you to join in. The prompt will be one random thing, but it will not be a subject. For instance, I will not say “Write about dogs”; the prompt will be more like, “Make your first sentence a question,” or “Begin with the word ‘The’.”

4. Ping back! It’s important, so that I and other people can come and read your post! For example, in your post you can write “This post is part of SoCS:” and then copy and paste the URL found in your address bar at the top of this post into yours.  Your link will show up in my comments, for everyone to see. The most recent pingbacks will be found at the top.

10 thoughts on “A Sticky Mud-Sucking Adventure”

Join 3,911 other subscribers
Follow Anything is Possible! on WordPress.com